Run an analysis of the numerous data points the Top 1000 of 2020 Digital Commerce 360 contains and you will discover new insights. Let’s look at five points that stand out in the Top 1000 report.
Even though selling out of physical stores and through printed catalogues might seem old school, there are still so many brands turning in huge profits from operating physical stores alongside the online ones.
These findings were an interesting discovery when we penned down the 2020 Digital Commerce 360 Top 1000 Report. Amongst other insights, they created a performance analysis for the first and best 1000 American businesses by e-commerce retail sales.

Here are five expected insights from the report:

Physical stores are eCommerce gold mines, particularly grocery stores
Many people think that eCommerce is the death of physical shopping, and is any store owner’s funeral. Yes, it might have taken a toll on small businesses but large vendors (especially grocery stores) with the resources to run omnichannel sales strategies are cashing out big time.
In 2019, Walmart, Home Depot, Target Corp, The Kroger Co., and Ascena Retail Group (No. 3, 5, 12, 13, and 38 respectively in Digital360 Top 1000 report), all recorded an eCommerce growth spike that beat Amazon’s (No. 1 in the Top 1000 report) 19.1 percent that same year.
What do these five stores have in common? They all retail food/beverages. In 2019, these five brands collectively improved by 21.6 percent in online sales to become the second-best category after home goods (which grew by 22.4 percent). One major growth factor for these food retailers is the option of the in-store and curbside pickup which became popular during the coronavirus pandemic.
However, if you remove Amazon as a virtual store from the comparison, you will find that physical retail stores experienced the most growth out of all four categories in the Top 1000, the other two being consumer brand manufacturers and call centre merchants. 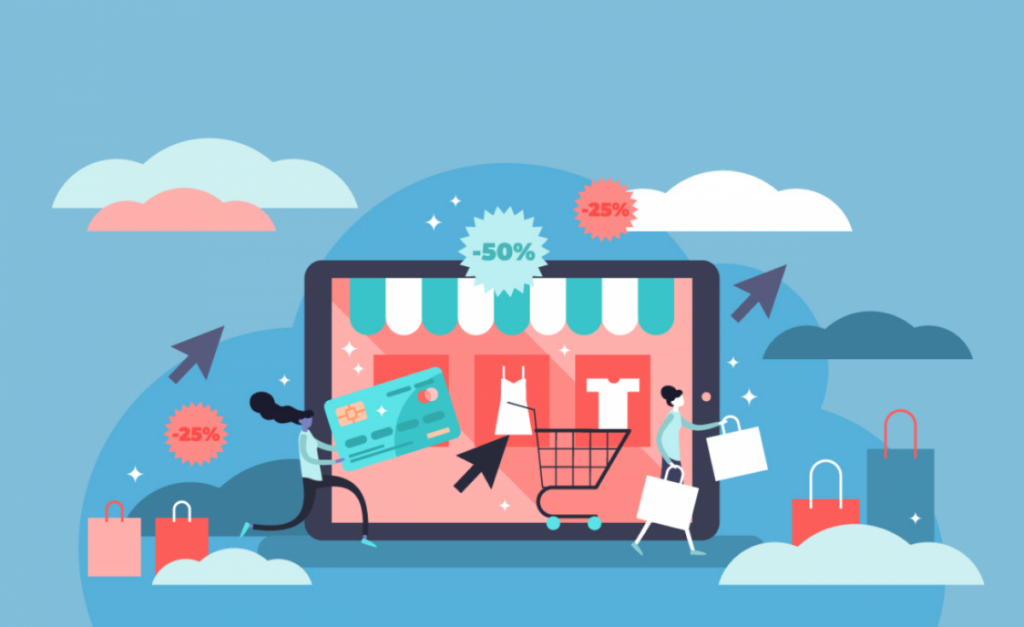 Many ‘old school’ brands that made it big by running adverts in print media are topping the Top 1000 chart alongside TV retailers using virtual stores and TV ads with CTAs. We call this category the call/catalog center merchants. In 2019, sales for the call centre merchants only rose by 7.5 percent, way lower than the average of 16.2 percent set by the Top 1000.
Nevertheless, the grouping of the ‘old school’ brands with call center merchants was an unfair combination that ruined their 2019 ratings. This was a result of Qurate Retail Group’s 3.2 percent sales decline in 2019 which greatly dropped the group’s performance. They rank No. 9 on the Top 1000 and are the biggest call/catalog center merchants on the list.
The drop was also a result of TV users unsubscribing to cable shopping channels. This action caused a loss of 19 million subscribers from 99 million in 2015. Qurate Retail claims to have gained 11 million new subscribers through other streaming platforms.
Besides Qurate Retail, the other brands in the group collectively saw a 10.2 percent growth in sales in 2019. It’s impressive because the growth rate for catalogers and ‘old school’ brands may be slow, but when they grow, they remain up there. The classic call/catalog retailer in the Top 1000 started eCommerce since 1998, three years before the median for the entire Top 1000.

Growth seems to come easy for big brands like Walmart, Amazon, Best Buy, and Target, so, most people think smaller businesses are counting losses. It is false.
In 2019, the Top 1000 vendors placed at Nos. 501-1000 grew their online sales collectively by 15.7 percent, way above America’s eCommerce market progress of 15.1 percent, nonetheless slower than the collective 16.3 percent growth of the vendors placed at Nos. 1-500. Remove Amazon’s result-skewing 19.1 percent growth and you will see that the rest of the 499 top retailers only grew by 14.9 percent in 2019 compared to the previous year.
In eCommerce, a lot of mid-sized retailers are also fairing nicely. If you split the Top 1000 into 10 groups of 100, the group that grew the quickest was the group with vendors No. 401-500. As a group, their revenue grew by up 18.1 percent in 2019.
The good news is that SMEs can hone eCommerce growth.

General accounts on online conversion rates are vague
There’s always one report somewhere claiming that out of every 50 visits to a virtual store, only one makes a purchase. There might be an element of truth in it but vendors need to do their site analysis by themselves. Your conversion rates are determined by how and what you sell.
Your niche is a major determinant of your conversion rates. If you sell in a niche where prospective customers have to compare and contrast before they make a one-time purchase (like the auto industry), your conversion rates will be lower than that of a vendor whose niche is a renewable commodity (like groceries or stationery).
In summary, as a vendor looking to measure your growth, hold your conversion rates against the rates of other similar vendors in your niche.

With the shutting down or downsizing of physical stores, businesses that still make consumer goods are using virtual stores. With this, they sell at retail prices which are more profitable than the usual wholesale prices which are cheaper by 30 to 50 percent. This may be the reason why over half of the 268 Top 1000 manufacturers of consumer goods use Amazon. Even with Amazon’s 15 percent commission and the ad costs, these businesses make huge profits off Amazon.
Now, businesses that are making money off online sales may not join the Amazon train. Out of them all, only 39.7 percent put up their products on Amazon, against 60.8 percent for the other 199 Top 1000 consumer brand manufacturers.
Amazon limits its sellers from contacting their shoppers directly making it difficult for these sellers to build an external customer base. Many of these sole eCommerce brands try to stand out, however, they can and only hope that they impress returning customers.

These are only some of the hidden trends that materialized from the 2020 Top 1000 report. With the coronavirus impeding shopping, the 2021 report will surely expose a multitude of moves in the affluence of America’s top online vendors.
”The 2020 Digital Commerce 360 Top 1000 Report can be downloaded now as a PDF for $499. Digital Commerce 360 Gold and Platinum members receive a complimentary copy of this report as a part of their membership.”