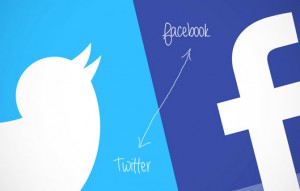 Twitter has already tested partnerships with an e-commerce site called Fancy and payments company Cardspring, which Twitter bought recently. Twitter is hoping to advance with their “buy later” feature before the holidays.

Facebook wants to allow small businesses to drive sales through their pages and buy directly through the social media network and not leave the page. This could help small businesses have an online presence without diving into a major platform like Volusion or Magento. Facebook also claims that this move is not to take cuts from each transaction but to serve online retailers better by consolidating a one-stop shop and one-stop advertising outlet for businesses.

If this is a success, it will be quite different from when Facebook tried to launch a ‘gifts’ portion of social media where friends could send birthday gifts but that failed and it was pulled off.

As for other popular social media networks, Pinterest and Instagram has yet to advance into this new level of social media eCommerce. And if they did, there would have to be lots of platform changes. For example, Pinterest is loaded with non-working links that are not useful to it’s audience if they wanted ‘more info’ or to ‘make a purchase’.

The biggest question is finding out if consumers want to mix social media (lighthearted fun) with shopping (possibility of breaking the bank) with each other on one platform. Only time will tell.